Essential tremor (ET) is a disorder of the brain that causes a rhythmic trembling of the hands, arms, head, voice, legs, or trunk. It is different than a Parkinson's disease tremor. Treatments focus on reducing symptoms and maximizing quality of life. Treatments for this progressive disorder include medication, physical therapy, deep brain stimulation, and radiosurgery.

What is essential tremor?

Essential tremor is an uncontrollable shaking, which usually starts on one side of the body. Tremors occur during purposeful movement, such as when drinking, eating or writing. Many people find the shaking troublesome or embarrassing (Fig. 1). Also known as familial tremor, benign essential tremor, or hereditary tremor, this disorder affects some 10 million Americans. It is a progressive condition that gets worse over time. ET can be treated with medication or surgery, but not cured.

Symptoms of essential tremor vary from person to person, as does the rate of progression.

Scientists do not know the cause of essential tremor. The abnormal electrical brain activity is believed to occur between the thalamus and cerebellum connections. There is no way to prevent ET.

There is no medical test that can confirm a diagnosis of ET. Your physician will review your medical history and family history, and will conduct a physical exam. He or she will explore whether another condition is causing your tremors by conducting a neurological exam and ordering laboratory tests. Your doctor also may give you a "performance test," in which you are asked to drink from a glass, hold your arms outstretched, write your name, or draw a spiral.

Essential tremor is sometimes misdiagnosed as Parkinson's disease. But whereas people with Parkinson's often have balance problems, slowness of movement, and freezing of gait, people with ET only rarely have problems in their legs.

Treatment depends on the symptoms and extent of disability caused by the tremor. If the tremor is mild, lifestyle adjustments may be all that are needed. As the condition progresses, medications or surgery can be used to relieve the symptoms.

Caffeine and stress should be avoided, and good sleep is recommended. Your doctor may recommend physical therapy, which can improve your muscle strength. Adaptive devices, including wide-grip pens and eating utensils, may help you compensate for your tremor. Alcohol, used in moderation, can reduce tremor for short periods of time.

Your doctor may prescribe certain drugs or injections to help reduce the tremors. These include, but are not limited to:

The goal of surgery is to reduce symptoms by modifying the abnormal signals that cause the tremor. This can be done with deep brain stimulation (DBS) or with radiosurgery.

DBS surgery involves implanting electrodes within the brain and connecting them to a stimulator device that resembles a pacemaker. The stimulator delivers electrical pulses to regulate brain activity. Radiosurgery creates a small, permanent lesion in the brain without a permanent implant.

In DBS surgery, an electrode is placed in a specific area of the brain (usually the thalamus). The electrode is placed on either the left or right side of the brain through a small hole made at the top of the skull. The electrode is connected by a long extension wire that is passed under the skin and down the neck to a battery-powered stimulator under the skin of the chest (Fig. 2). When turned on, the device sends electrical pulses to block the faulty nerve signals that cause tremors. 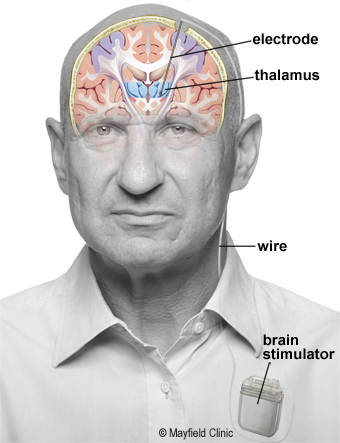 You will use a handheld controller to turn the DBS system on and off. Your doctor will program the stimulator settings with a wireless device. The stimulation settings can be adjusted as your condition changes over time.

Most people don't feel the stimulation as it reduces their symptoms. However, some people may feel a brief tingling sensation when the stimulator is first turned on.

It's important to remember that essential tremor is progressive, and symptoms get worse over time. It is likely that you may need further programming in the future. See your neurologist or neurosurgeon when your condition changes.

Radiosurgery treatment of ET is an outpatient procedure in which highly focused radiation beams are used to destroy overactive cells that cause tremor. Radiation is delivered with pinpoint accuracy to the target, a small area in the thalamus called the ventral intermediate (VIM) nucleus (Fig. 3). The procedure is painless has few, if any, side effects. 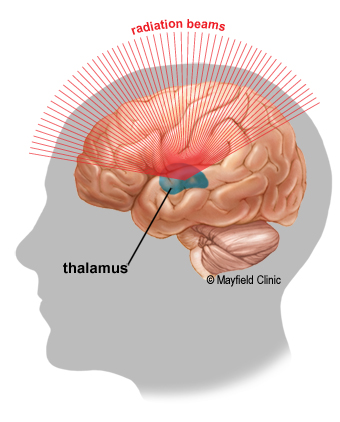 The two main technologies are the Leksell Gamma Knife and linear accelerator systems such as the BrainLab Novalis. A stereotactic head frame or facemask is attached to the patient's head to precisely localize the target area on an MRI scan and to hold the head perfectly still during treatment. Highly focused beams of radiation are delivered to the thalamus.

Radiation works by damaging DNA inside cells, making them unable to divide and grow. Patients typically experience a reduction in tremor a few months after treatment.

Seek treatment at a center that offers significant experience, a team approach, and the full range of treatment options, including medication, surgery, and rehabilitation (physical, exercise, voice, balance).

Surgeries for essential tremor are performed by a neurosurgeon who has specialized training in functional neurosurgery.

The timing of when to consider surgery is different for each patient. If you have tremor despite optimal medications, then surgery should be considered. The type of surgery chosen will depend on your medical condition and personal needs. You and your physician can discuss which option is best for you.

Unlike other surgeries, such as pallidotomy, thalamotomy, or radiosurgery, DBS does not damage the brain tissue. Thus, if better treatments develop in the future, the DBS procedure can be reversed. (Three companies have FDA approval to manufacture DBS devices. Ask your physician about which one is best for you.)

Only the side that is most affected is treated first. Then it is up to the patient and physician to decide if the other side is to be operated on in the future.

Successful DBS is related to 1) appropriate patient selection, 2) appropriate selection of the brain area for stimulation, 3) precise positioning of the electrode during surgery, and 4) experienced programming and medication management. DBS for essential tremor may significantly reduce hand tremor in 60% to 90% of patients and may improve head and voice tremor.

Patients report other benefits of DBS. For example, better sleep, more involvement in physical activity, and improved quality of life.

Once the DBS stimulator has been programmed, you are sent home with instructions for adjusting your own stimulation. The handheld controller allows you turn the stimulator on and off, select programs, and adjust the strength of the stimulation. Most patients keep their DBS system turned on 24 hours day and night. Some patients with essential tremor can use it during the day and turn off the system before bedtime. Your doctor may alter the settings on follow-up visits if necessary.

If your DBS has a rechargeable battery, you will need to use a charging unit. On average charging time is 1 to 2 hours per week. You will have a choice of either a primary cell battery or a rechargeable unit and you should discuss this with you surgeon prior to surgery.

Just like a cardiac pacemaker, other devices such as cellular phones, pagers, microwaves, security doors, and anti theft sensors will not affect your stimulator. Be sure to carry your Implanted Device Identification card when flying, since the device is detected at airport security gates.

pallidotomy: a surgical procedure that destroys the nerve cells in the globus pallidus of the brain. Used to treat the symptoms of rigidity and tremor.

thalamotomy: a surgical procedure that destroys the nerve cells in the thalamus of the brain. Used to treat the symptoms of tremor or pain.

Mayfield Brain & Spine is a leader in the treatment of movement disorders, which include Parkinson's disease, essential tremor, and dystonia. In collaboration with premier hospitals in the Greater Cincinnati-Northern Kentucky region, we perform about 120 deep brain stimulation surgeries a year.