It was shortly after moving back to Greater Cincinnati from San Francisco that it hit Lauren Ostling – she had come home.

"We were shooting baskets with my son in the driveway," said Mayfield Brain & Spine's newest neurosurgeon. "That was just kind of my quintessential Cincinnati memory. Warm summer nights outside, having that time to spend with family."

Dr. Ostling starts seeing patients April 14. She feels like she is coming home professionally as well, after forming friendships with several of her Mayfield colleagues during her neurosurgery residency at the University of Cincinnati.

But it was family that drew the Oak Hills High School product home. Both she and her husband Ben grew up in the Cincinnati area. Because of the distance and COVID restrictions, neither of their families had met her 10-month-old daughter before they returned.

"I want my kids to experience life the way most of America experiences it," she said. "We want to bring up our kids with the values we were brought up with."

Family also played a part in Dr. Ostling's decision to become a doctor. Her younger brother underwent surgery to remove a brain tumor when he was only three years old, and it left an impression on her.

"I wanted to give back some of what was given to us," she said. "I've wanted to be a physician for a long time. My parents tried to talk me out of it. I'm probably the only person in the world to have that happen."

At Mayfield, Dr. Ostling will work mostly from the Green Township offices and perform procedures at Mercy West Hospital and the Mayfield Spine Surgery Center. She has extensive training in minimally invasive spine procedures, and her fellowship in pediatrics will provide an opportunity to serve patients transitioning between pediatric care and adult care.

"As children transition, it's really hard," she said. "Switching from all of the pediatric providers to adult providers, it can be a mess to navigate."

Outside of the office, Dr. Ostling runs a few times a week, but most of her time is focused on her two children, the 10-month-old and a four-year-old son. She was a competitive swimmer in high school, and even though she doesn't find time to swim much anymore, she said the habits still come in handy. 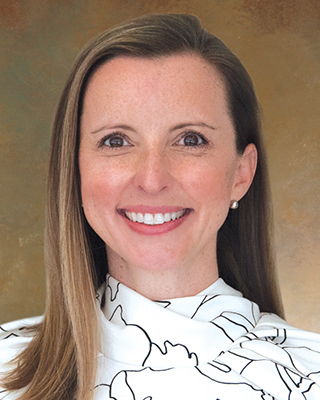