A visual field acuity test is a painless test that determines how well a person can see. The test maps central vision as well as peripheral (side) vision. The test is performed by an ophthalmologist and is used to detect areas of vision loss (blind spots) caused by a brain tumor, stroke, glaucoma, diabetes, hypertension, or head trauma. It can also be used to monitor the progression of previously known visual field loss.

How does a visual field test work?

During a visual field acuity test, also called a perimetry test, you will respond to a series of flashing lights while looking straight ahead. Your responses will help the doctor determine whether you have a visual field loss.

The area of vision loss gives clues as to where in the visual pathway a problem has occured. Vision begins with special receptors at the back of the eye in the retina. The image captured by each eye is sent to the brain by the optic nerves (Fig. 1). When the nerves reach the optic chiasm, they cross over each other. The nerve fibers from the inside half of each retina cross to the other side of the brain, while the nerve fibers from the outside half of the retina stay on the same side of the brain. At the end of the optic nerve, the optic radiations send the images to the occipital lobe at the back of the brain. The area where vision is interpreted is called the primary visual cortex. 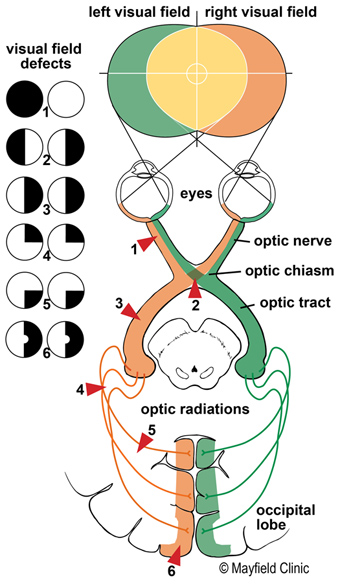 What does a visual field test show?

The visual field test produces a computer printout of the light thresholds that the patient’s eyes were able to perceive and process (Fig. 2). The darkest areas of the test indicate a complete loss of vision in that area. The lighter the area, the more vision the patient has in that part of the eye.

Visual field loss, also known as “visual field cut,” can be partial or complete. For example, it can range from a nearly complete loss of peripheral vision to a small area of partial loss. People with visual field loss may have trouble seeing objects out of the corner(s) of their eyes, lose their place while reading, startle when people or objects move toward them, or bump into people and objects.

A visual field test can also tell the ophthalmologist and surgeon whether a lesion is located in front of, on, or behind the optic chiasm. Such information is used to help plan the patient’s surgery and to establish a vision baseline that can be referred to for comparison after brain surgery.

Who performs the test?

How should I prepare for the test?

There is no special preparation for the test. Listen closely while undergoing the test so that the results are as accurate as possible.

What happens during the test?

During the test you will sit in front of a concave dome and stare at an object in the middle. Each eye is tested separately, and the eye not being tested is covered with a patch. You will be asked to press a button when you see small flashes of light in your peripheral vision.

Occasionally, a patient presses the button by accident (causing a false positive) or fails to press the button when a flash of light appeared (causing a false negative). The reliability of the test also depends on the patient’s ability to look straight ahead and avoid looking around at the targets. A patient who is sleepy or confused may also have difficulty doing the test.

Visual field results are interpreted to establish artifact from disease to account for an abnormal test. Some patients will have a completely normal test, while others will show a visual field loss that is in one or both eyes).

Following the visual field test, your eyes may be dilated to examine the retina, macula, and optic nerve. This is to ensure that there is no other cause for visual field loss, visual impairment, or other ocular disease.

The test carries no risks.

How do I get the test results?

A neuro-ophthalmologist will promptly review your results and communicate directly with your referring doctor, who will discuss the results with you at a later time.

If you have further questions about this diagnostic test, contact the doctor who ordered the test.

bitemporal hemianopia: the two halves lost are on the outside of each eye's peripheral vision, effectively creating a central visual tunnel.

hemianopia: loss of half of the visual field.

homonymous hemianopia: the two halves lost are on the corresponding area of visual field in both eyes, i.e., either the left or the right half of the visual field.

altitudinal hemianopia: refers to the horizontal dividing line of visual loss, with that loss occurring either above or below the line.

quadrantanopia: is an incomplete hemianopia, referring to a quarter of the schematic "pie" of visual field loss.

scotoma: a blind spot occurring in any part of the visual field.

In neuroscience, a picture is worth a thousand words. Maybe more.

At Mayfield, we work with diagnostic imaging providers in the Greater Cincinnati-Northern Kentucky region to obtain images of the brain and spine and interpret them with expertise and care. Patients and referring physicians can rest assured that we will lay the groundwork for a diagnosis of utmost accuracy.