Traumatic brain injury (TBI) is sudden damage to the brain caused by a blow or jolt to the head. Common causes include car or motorcycle crashes, falls, sports injuries, and assaults. Injuries can range from mild concussions to severe permanent brain damage. While treatment for mild TBI may include rest and medication, severe TBI may require intensive care and life-saving surgery. Those who survive a brain injury can face lasting effects in their physical and mental abilities as well as emotions and personality. Most people who suffer moderate to severe TBI will need rehabilitation to recover and relearn skills.

What is a traumatic brain injury?

TBI is an injury to the brain caused by a blow or jolt to the head from blunt or penetrating trauma. The injury that occurs at the moment of impact is known as the primary injury. Primary injuries can involve a specific lobe of the brain or can involve the entire brain. Sometimes the skull may be fractured, but not always. During the impact of an accident, the brain crashes back and forth inside the skull causing bruising, bleeding, and tearing of nerve fibers (Fig. 1). Immediately after the accident the person may be confused, not remember what happened, have blurry vision and dizziness, or lose consciousness. At first the person may appear fine, but their condition can decline rapidly. After the initial impact occurs, the brain undergoes a delayed trauma – it swells – pushing itself against the skull and reducing the flow of oxygen-rich blood. This is called secondary injury, which is often more damaging than the primary injury. 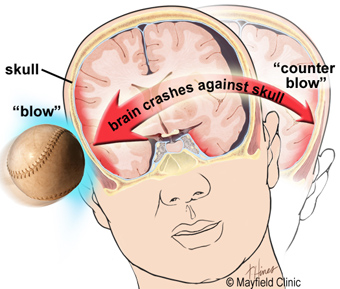 Traumatic brain injuries are classified according to the severity and mechanism of injury:

Although described as individual injuries, a person who has suffered a TBI is more likely to have a combination of injuries, each of which may have a different level of severity. This makes answering questions like “what part of the brain is hurt?” difficult, as more than one area is usually involved.

Secondary brain injury occurs as a result of the body's inflammatory response to the primary injury. Extra fluid and nutrients accumulate in an attempt to heal the injury. In other areas of the body, this is a good and expected result that helps the body heal. However, brain inflammation can be dangerous because the rigid skull limits the space available for the extra fluid and nutrients. Brain swelling increases pressure within the head, which causes injury to parts of the brain that were not initially injured. The swelling happens gradually and can occur up to 5 days after the injury.

Depending on the type and location of the injury, the person's symptoms may include:

Diffuse injuries (such as a concussion or diffuse axonal injury) will typically cause an overall decreased level of consciousness. Whereas, focal injuries (such as an ICH or a contusion) will have symptoms based on the brain area affected (Fig. 2). 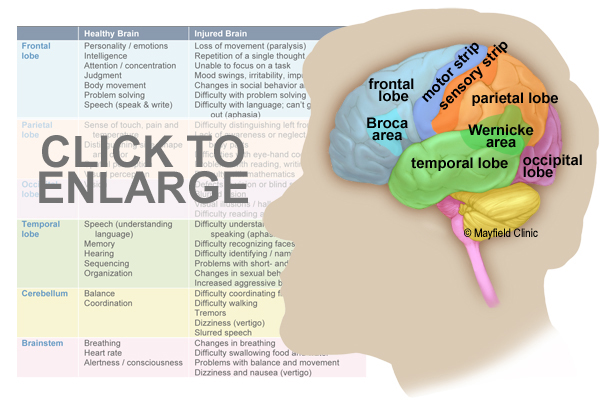 Every patient is unique and some injuries can involve more than one area or a partial section, making it difficult to predict which specific symptoms the patient will experience.

Common causes include falls, car or motorcycle crashes, vehicular accidents involving pedestrians, athletics, and assaults with or without a weapon.

Approximately 1.5 to 2 million adults and children suffer a traumatic brain injury (TBI) each year in the United States. Most people who experience a head injury, about 1.1 million, will have a mild injury that does not require an admission to the hospital. Another 235,000 individuals will be hospitalized with a moderate to severe head injury, and approximately 50,000 will die.

When a person is brought to the emergency room with a head injury, doctors will learn as much as possible about his or her symptoms and how the injury occurred. The person's condition is assessed quickly to determine the extent of injury.

The Glasgow Coma Score (GCS) is a 15-point test used to grade a patient's level of consciousness. Doctors assess the patient's ability to 1) open his or her eyes, 2) ability to respond appropriately to orientation questions, (“What is your name? What is the date today?”), and 3) ability to follow commands (“Hold up two fingers, or give a thumbs up”). If unconscious or unable to follow commands, his or her response to painful stimulation is checked. A number is taken from each category and added together to get the total GCS score. The score ranges from 3 to 15 and helps doctors classify an injury as mild, moderate, or severe. Mild TBI has a score of 13-15. Moderate TBI has a score of 9-12, and severe TBI has a score of 8 and below.

Diagnostic imaging tests will be performed: 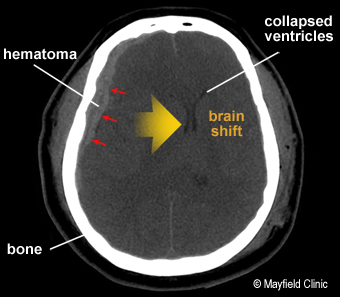 Mild TBI usually requires rest and medication to relieve headache. Moderate to severe TBI require intensive care in a hospital. Bleeding and swelling in the brain can become an emergency that requires surgery. However, there are times when a patient does not require surgery and can be safely monitored by nurses and physicians in the neuroscience intensive care unit (NSICU).

The goals of treatment are to resuscitate and support the critically ill patient, minimize secondary brain injury and complications, and facilitate the patient's transition to a recovery environment. Despite significant research, doctors only have measures to control brain swelling, but do not have a way to eliminate swelling from occurring.

Neurocritical care
Neurocritical care is the intensive care of patients who have suffered a life-threatening brain injury. Many patients with severe TBI are comatose or paralyzed; they also may have suffered injuries in other parts of the body. Their care is overseen by a neurointensivist, a specialty-trained physician who coordinates the patient's complex neurological and medical care. Patients are monitored and awakened every hour for nursing assessments of their mental status or brain function. 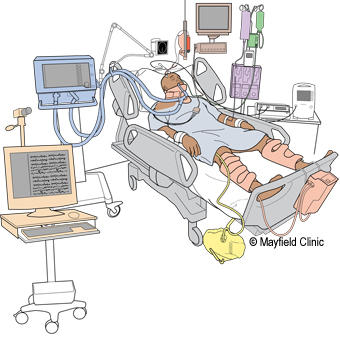 Seeing a patient who has suffered a severe TBI can be shocking. It is possible that your loved one's appearance will be altered because of facial injury and equipment that is used for monitoring. Numerous tubes, lines, and equipment may be used to closely monitor his or her heart rate, blood pressure, and other critical body functions. (Fig. 4) 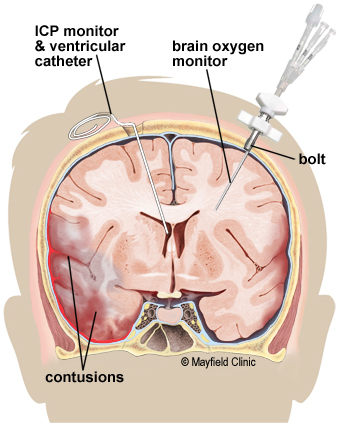 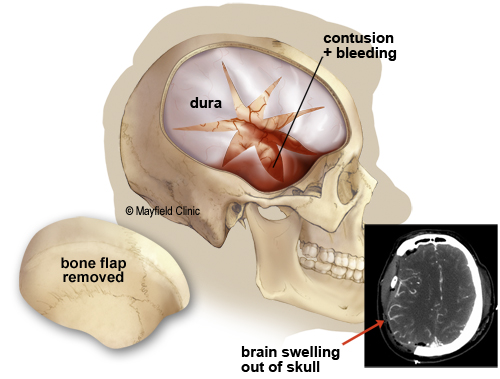 Other surgical procedures may be performed to aid in the patient's recovery:

The recovery process varies depending on the severity of the injury, but typically progresses through stages: coma, confusion / amnesia, and recovery.

Not all head injuries are the same. Patients recover at different rates and to varying degrees. It is difficult to determine at what point a patient will start understanding and interacting with their caregivers or family in a meaningful way. It is important to have patience; recovery from a brain injury can take weeks, months, or even years.

The Family's Role
Many family members express feelings of helplessness when their loved one is in the NSICU. You are not alone. Please take care of yourself and use your energy wisely.

Visiting hours are limited in the NSICU. Too much stimulation can agitate the patient and raise his or her blood pressure. You can most effectively convey your concern by sitting quietly and holding your loved one's hand. Be aware that the patient, though silent, may hear anything you say. Never speak as if the patient were not there.

As patients recover, they need help understanding what has happened to them during this “lost period of time.” Keep in mind that the recovery of consciousness is a gradual process – not just a matter of waking up. Progress is usually tracked in three areas: movement, thinking, and interacting. You can help by keeping a diary of their progress. Family photos may help with regaining memory.

Rehabilitation
Most patients are discharged from the hospital when their condition has stabilized and they no longer require intensive care. A social worker will work closely with the family as preparations are made for a return home or for transfer to a long-term care or rehabilitation center.

Recovering from a brain injury relies on the brain's plasticity—the ability for undamaged areas of the brain to take over functions of the damaged areas. It also relies on regeneration and repair of nerve cells. And most importantly, on the patient's hard work to relearn and compensate for lost abilities.

Tips to reduce the risk for a head injury:

Support groups provide an opportunity for patients and their families to share experiences, receive support, and learn about advances in treatments and medications.

closed head injury: brain injury from an external impact that does not break the skull.

coma: a state of unconsciousness from which the person cannot be aroused; Glasgow Coma Scale score of 8 or less.

concussion: widespread injury to the brain caused by a hard blow or violent shaking, causing a sudden and temporary impairment of brain function, such as a short loss of consciousness or disturbance of vision and equilibrium.

contusion: a bruise to a specific area of the brain; caused by an impact and broken blood vessels.

diffuse axonal injury (DAI): injury to the nerve cell axons from rapid rotational or deceleration of the brain. DAI is often seen in motor vehicle accidents or shaking injuries. The nerve axons, which compose the white matter of the brain, are twisted or torn by shearing forces.

edema: tissue swelling caused by the accumulation of fluid.

hydrocephalus: an abnormal build-up of cerebrospinal fluid usually caused by a blockage of the ventricular system of the brain. Increased intracranial pressure can compress and damage brain tissue. Also called "water on the brain."

ischemia: a low oxygen state usually due to obstruction of the arterial blood supply or inadequate blood flow in the tissue.

open head injury: penetration of the skull pushing skull fragments or  objects (bullet) into the brain.

ventricles: hollow areas in the center of the brain containing cerebrospinal fluid. There are four ventricles: two lateral ventricles (one on each side of the brain), the third ventricle, and the fourth ventricle.

Through our affiliation with premier hospitals in the Greater Cincinnati-Northern Kentucky region, Mayfield physicians provide the most highly skilled surgical care available to patients who suffer neurotrauma. We collaborate with trauma surgeons, neurologists, and neurointensivists, who work one-on-one with patients and families. And we work closely with dedicated nurses, who are trained to help you understand your loved one's condition and gain access to available resources.

Q&A: Trauma Season Is a Time of Preventable Neurological Tragedies

For support groups in the Greater Cincinnati area, contact the Brain Injury Association of Ohio Support Group at (513) 542-2704.

Lobes of the human brain 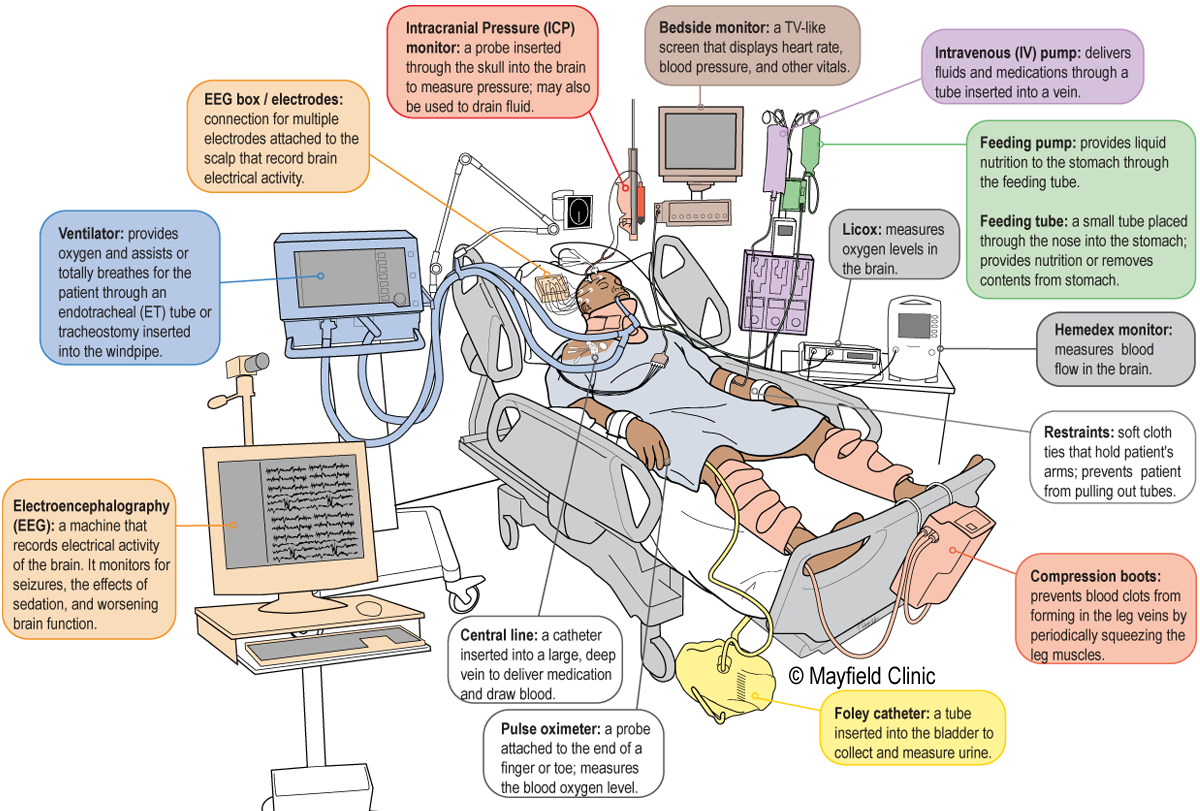