An aneurysm is a balloon-like bulge of an artery wall. As an aneurysm grows it puts pressure on nearby structures and may eventually rupture. Most people find out they have an unruptured aneurysm by chance during a scan for some other problem. The risk of rupture varies depending on the aneurysm location and size. Treatment options include observation, clipping, coiling, flow diversion, or bypass. 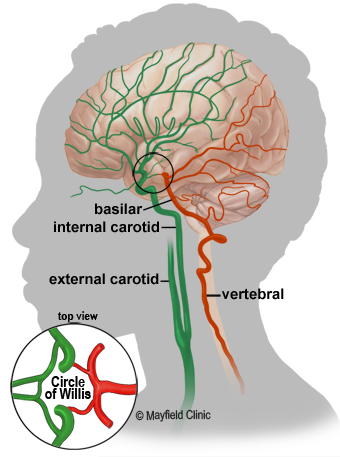 What is an unruptured brain aneurysm?

An aneurysm is a balloon-like bulge or weakening of an artery wall. (Similar to a balloon on the side of a garden hose.) As the bulge grows it becomes thinner and weaker. It can become so thin that the blood pressure within can cause it to leak or burst open — a life-threatening hemorrhage in the brain. The vast majority of aneurysms are silent, meaning they have no symptoms until they rupture. It is impossible to predict if and when an aneurysm may rupture, but when they do it can cause major disability and be fatal in 40% of people. On the other hand, many people die of old age with an aneurysm, but not because of it. So, not every aneurysm is at high risk of rupture.

Aneurysms usually occur on larger blood vessels at the fork where an artery branches off. Types of aneurysms include (Fig. 2):

Saccular - (most common, also called "berry") the aneurysm bulges from one side of the artery and has a distinct neck at its base.

Fusiform - the aneurysm bulges in all directions and has no distinct neck.

Dissecting - a tear in the inner wall of the artery allows blood to split the layers and pool; often caused by a traumatic injury. 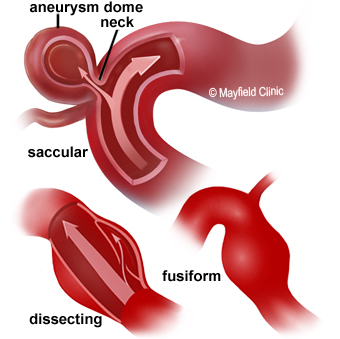 Figure 2. A saccular aneurysm arises at the weak point of the artery where it branches. Other aneurysm types include dissecting and fusiform.

Aneurysms are also classified by size:

Symptoms of an unruptured aneurysm:

Studies have shown a strong link to family history (2). If an immediate family member has suffered an aneurysm, you are 4 times more likely to have one as well. The genetic link is not completely understood and studies are underway to determine if there is a pattern of inheritance. The most important inherited conditions associated with aneurysms include Ehlers-Danlos IV, Marfan’s syndrome, neurofibromatosis NF1, and polycystic kidney disease. For those with a strong family history of aneurysm in two or more blood relatives, we recommend a screening test with a CT or MR angiogram.

Most people find out they have an unruptured aneurysm by chance (incidental) during a scan for some other medical problem. If you are experiencing symptoms and your primary care doctor suspects an aneurysm, you may be referred to a neurosurgeon. The surgeon will learn as much about your symptoms, current and previous medical problems, current medications, family history, and perform a physical exam. Diagnostic tests are used to help determine the aneurysm's location, size, type, and involvement with other structures.


What treatments are available?

Deciding how, or even if, to treat an unruptured aneurysm involves weighing the risks of rupture versus the risks of treatment. In addition to size and location of the aneurysm, your overall health and medical history must be considered. Generally, the larger the aneurysm, the higher risk of rupture. The neurosurgeon will discuss with you all the options and recommend a treatment that is best for your individual case.

Observation
Sometimes the best treatment may be to simply watch the aneurysm over time and reduce your risk of rupture. You should quit smoking, and control high blood pressure. Aneurysms that are small, unruptured, and asymptomatic may be observed with imaging scans every year until the growth or symptoms necessitate surgery. Observation may be the best option for patients with other health conditions.

Surgical clipping
Clipping is an open surgery performed under general anesthesia. An opening is cut in the skull, called a craniotomy. The brain is gently retracted so that the artery with the aneurysm may be located. A small clip is placed across the neck of the aneurysm to block the normal blood flow from entering the aneurysm (Fig. 3). The clip is made of titanium and remains on the artery permanently. Recovery time typically is four to six weeks, but symptoms may last longer. 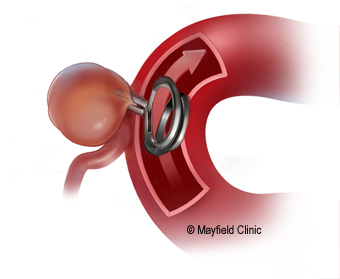 Figure 3: A titanium clip is placed across the neck of an aneurysm so that the blood flows through the artery, but not the aneurysm.

Artery occlusion and bypass
If the aneurysm is large and inaccessible or the artery is too damaged, the surgeon may perform a bypass surgery. A craniotomy is cut to open the skull and clips are placed to completely block off (occlude) the artery and aneurysm. The blood flow is then rerouted (bypassed) around the occluded artery by inserting a vessel graft . The graft is a small artery, usually taken from your leg, which is connected above and below the blocked artery so that blood flows through the graft.

Another method is to detach a donor artery from its normal position on the scalp and connect it above the blocked artery inside the skull. This is called a STA-MCA (superficial temporal artery to middle cerebral artery) bypass. Recovery time typically is four to six weeks, but symptoms may last longer.

Endovascular coiling
In contrast to open surgery, a minimally invasive option is endovascular coiling. It is performed during an angiogram in the radiology department. During a coiling procedure, a catheter is inserted into an artery in the groin and then passed through the blood vessels to the aneurysm in the brain. The doctor guides the catheter through the bloodstream while watching an x-ray monitor. Through the catheter, the aneurysm is packed with a basket of platinum coils. The coils induce clotting (embolization), which seals off the aneurysm and prevents blood from entering (Fig. 4). Recovery time typically is two to four days. Follow-up imaging is performed periodically for 5 years to confirm the coils have not compacted and the aneurysm is not regrowing. 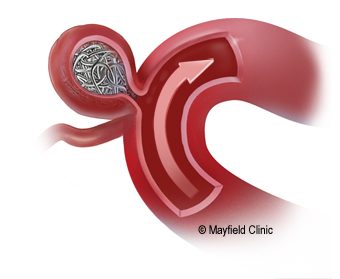 Figure 4. The aneurysm is packed with platinum coils. The coils induce clotting (embolization), which seals off the space and prevents blood from entering the aneurysm.

Endovascular flow diversion
If clipping or coiling would be difficult due to the shape, size, or wide neck of the aneurysm, a flow diversion stent may be used. A flow-diverter is a tightly woven mesh tube placed inside the parent artery across the aneurysm (Fig. 5). Because blood cannot easily get through the spaces of the tight mesh stent, the blood flows inside the flow-diverter and continues down the artery without going into the aneurysm. Without the pulsating blood flow, the aneurysm will eventually clot off and shrink. Recovery time typically is two to four days. 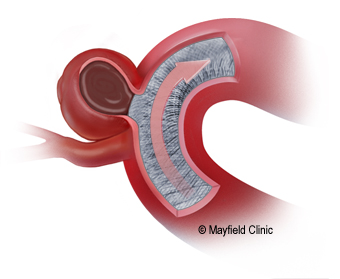 Figure 5. A flow-diverter mesh stent is placed inside the artery to reduce blood flow from entering the aneurysm. The aneurysm will eventually clot off and shrink.

Should the aneurysm be treated?

Deciding how, or even if, to treat an unruptured aneurysm involves weighing the risks of rupture versus the risks of treatment. In general, surgical craniotomy carries a higher risk of brain disability in cognition and memory, especially for people over age 65. But endovascular procedures have a higher risk of aneurysm recurrence. Listed are general pros and cons to discuss with your neurosurgeon:

Unruptured aneurysm patients recover from surgery or endovascular treatment much faster than those who suffer a SAH.

Aneurysm patients may suffer short-term and/or long-term deficits as a result of a treatment or rupture. Some of these deficits may disappear over time with healing and therapy.

Ehlers-Danlos IV: a genetic disorder of the connective tissue in the intestines, arteries, uterus, and other hollow organs that may lead to organ or blood vessel rupture.

Marfan’s syndrome: a genetic disorder in which patients develop skeletal defects in long bones, chest abnormalities, curvature of the spine, and circulatory defects.

neurofibromatosis (NF1): a genetic disorder, also called von Recklinghausen disease, in which patients develop café-au-lait spots, freckling, and multiple soft tumors under the skin and throughout the nervous system.

polycystic kidney disease: a genetic disorder in which patients develop multiple cysts on the kidneys; associated with aneurysms of blood vessels in the brain.