Intracranial stenosis is a narrowing of an artery inside the brain. A buildup of plaque (atherosclerosis) inside the artery wall reduces blood flow to the brain. Atherosclerosis that is severe enough to cause symptoms carries a high risk of stroke and can lead to brain damage and death. Treatments aim to reduce the risk of stroke by controlling or removing plaque buildup and by preventing blood clots. 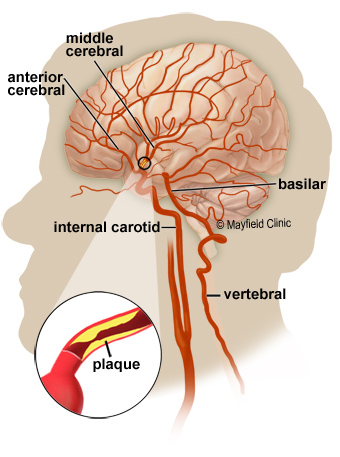 What is intracranial artery stenosis?

Intracranial stenosis is a narrowing of the arteries inside the brain. Similar to carotid stenosis in the neck, it is caused by a buildup of plaque in the inner wall of the blood vessels. This narrowing of the blood vessels causes decreased blood flow to the area of the brain that the affected vessels supply. There are three ways in which intracranial artery stenosis can result in a stroke:

The symptoms of intracranial artery stenosis are a transient ischemic attack (TIA) or stroke, which can be described with the mnemonic FAST:

Symptoms of a TIA and stroke are similar. TIAs result when blood flow to the brain is temporarily interrupted and then restored. The symptoms typically last a couple of minutes and then resolve completely, and the person returns to normal. However, TIAs should not be ignored; they are a warning that an ischemic stroke and permanent brain injury may be looming. If you or a loved one develops these symptoms, you should call 911 immediately.

Atherosclerosis is a major cause of intracranial artery stenosis. It can begin in early adulthood, but symptoms may not appear for several decades. Some people have rapidly progressing atherosclerosis during their thirties, others during their fifties or sixties. Atherosclerosis begins with damage to the inner wall of the artery caused by high blood pressure, diabetes, smoking, and elevated “bad” cholesterol. Other risk factors include obesity, heart disease, family history, and advanced age.

Intracranial stenosis is responsible for 8 to 10% of strokes in the United States and affects certain ethnic groups more than others. These groups include African Americans, Asian Americans, and Hispanics. Patients with intracranial artery disease tend to be younger than those with carotid artery disease in the neck.

The doctor will learn as much as possible about your symptoms, current and previous medical problems, current medications, and family history. He or she will perform a physical exam. One or more diagnostic imaging tests will be performed to detect narrowing of the intracranial arteries: 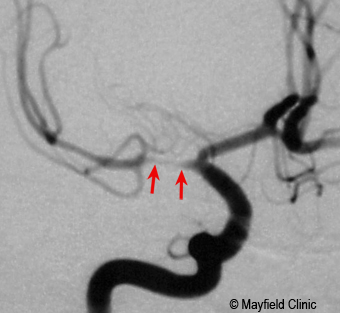 The goal of treatment is to reduce the risk of stroke. Treatment options for intracranial stenosis vary according to the severity of the narrowing and whether you are experiencing stroke-like symptoms or not. Patients are first treated with medication and are encouraged to make lifestyle changes to reduce their risk of stroke. Surgery is limited to patients whose symptoms do not respond to medication.

Medications
Intracranial stenosis can be treated with medications that minimize risk factors, including high cholesterol and blood pressure. If you smoke, you may be prescribed medications that help you quit. Patients with diabetes will be advised to maintain tight control of their blood sugar through a healthful diet and careful monitoring.

Surgery
The aim of surgery is to prevent stroke by removing or reducing the plaque buildup and enlarging the artery to allow more blood flow to the brain. Surgical treatment is considered for patients whose symptoms do not respond to medication. For example, those who continue to have TIAs or strokes, those with a high grade of stenosis, and those with insufficient blood supply to an area of the brain.

Clinical trials
Clinical trials are research studies in which new treatments—drugs, diagnostics, procedures, and other therapies—are tested in people to see if they are safe and effective. Research is always being conducted to improve the standard of medical care. Information about current clinical trials, including eligibility, protocol, and locations, are found on the Web. Studies can be sponsored by the National Institutes of Health (see Clinicaltrials.gov) as well as private industry and pharmaceutical companies (see Centerwatch.com).

After angioplasty, restenosis can occur in 7.5 to 32.4% of patients and is usually not symptomatic. The long-term outcome of stroke prevention after angioplasty is not yet known, but short-term results are promising and is currently being studied in clinical trials.

It’s important to understand that atherosclerosis is a progressive disease. To prevent a stroke, your physician may ask you to stop smoking, limit heavy alcohol consumption, maintain good blood-sugar control (if you have diabetes), lower your cholesterol, and take medications as prescribed.

atherosclerosis: a disease of the arterial blood vessels, in which the walls of the arteries become thickened and hardened by plaques. Plaques are composed of cholesterol and other lipids, inflammatory cells, and calcium deposits; also called “hardening of the arteries.”

transient ischemic attack (TIA): a “mini” stroke caused when blood flow to the brain is temporarily interrupted and then restored; causes no permanent brain damage.

vasospasm: abnormal narrowing or constriction of arteries due to irritation of the vessel wall or by blood in the subarachnoid space.

Mayfield Brain & Spine treats more than 200 people with intracranial artery stenosis each year. Rapid treatment of plaque buildup (atherosclerosis) in the arteries of the brain can greatly reduce the risk of stroke. Our neurosurgeons and endovascular surgeons perform balloon angioplasty / stenting, and cerebral artery bypass.