Epilepsy surgery is performed to either remove the brain area where seizures begin or stop the spread of seizure activity. It is a treatment option for people with seizures that are not controlled with medication. "Medically intractable seizures" are defined as persistent seizures despite trials of three or more antiepileptic drugs, alone or in combination. The goal of surgery is to to achieve better seizure control without causing loss of brain function.

What is epilepsy surgery?

Curative procedures, such as lobectomy, cortical excision, or hemispherectomy aim to remove the area of the brain (seizure focus) causing seizures. The goal is to remove all of the seizure focus area without causing loss of brain function. Palliative procedures, such as corpus callosotomy or vagus nerve stimulation (VNS), aim to reduce seizure frequency or severity. People who are considered for surgery undergo extensive testing to locate the source of their seizures and to ensure that removing that region of the brain will not impact their speech, mobility or quality of life [2,3]. 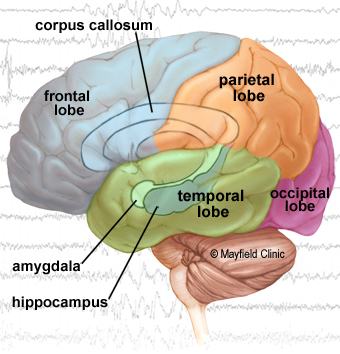 Curative procedures are performed when tests consistently point to a specific area of the brain where the seizures begin.

Palliative procedures are performed when a seizure focus cannot be determined or it overlaps brain areas critical for movement, speech, or vision.

Who is a candidate?

Epilepsy surgery may be an option if you have:

Most experts recommend that a patient who continues to have seizures after trials of 2 or 3 different medications should have an evaluation at a comprehensive epilepsy treatment program. likelihood of seizure freedom after failure of 3 different medications is less than 5% [1, 2]. The epilepsy team typically consists of epileptologists (neurologists with special expertise in epilepsy), neurosurgeons, neuropsychologists, epilepsy nurse clinicians, and EEG technicians.

Patients are initially evaluated by an epileptologist. A complete medical history and physical exam helps identify critical information, such as age of onset and type of seizures (including frequency, severity, and duration) (see Seizures). A patient’s physical exam is usually normal. However, some asymmetries may be seen related to early development when the structural brain lesions formed. For example, a difference in the size of one hand or foot compared to the other may correlate with atrophy of one of the brain’s hemispheres.

The following diagnostic studies may be used during an evaluation for epilepsy surgery. Not all tests are required. The epilepsy team will decide which tests are appropriate.

Electrical brain mapping, or electrocorticography, are diagnostic tests that may be necessary if the seizure focus is believed to lie close to important functional areas or if the exact location of the seizure focus remains unclear despite standard EEG and other tests. During a craniotomy operation for these diagnostic tests, subdural or depth electrodes are placed directly on or in the brain through a hole in the skull (craniotomy). 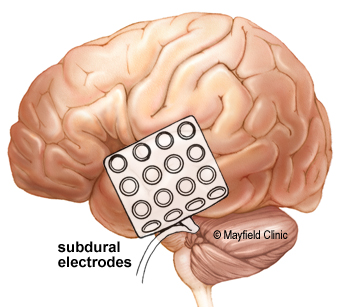 After the electrodes are placed, the wound is completely closed and bandaged. The patient is then moved to the epilepsy monitoring unit (EMU). The EEG technician will connect the electrodes (via wires that pass through small incisions in the skin) to an EEG machine that shows the brain waves and seizure activity. The patient remains in the hospital until sufficient information has been gathered to guide further treatment (typically 5-10 days). If the seizure focus is found and is not in an area of the brain involved in communication, a second surgery may be recommended to remove that brain area. If the seizure focus is not found, the electrodes are removed; follow up consultation with the epileptologist and neurosurgeon will follow. Risks associated with electrical brain mapping include infection and hemorrhage in about 2% to 5% of cases.

The epilepsy team meets to review all testing performed to decide if surgery is the best treatment option. All tests should point to a single region in the brain as the source for seizures. If this is the case, and the region of seizure onset is a safe distance away from areas of the brain that control language, movement, and vision, then surgery can be recommend to reduce or eliminate seizures.

Epilepsy surgery is done by a neurosurgeon specifically trained in this field. A patient should have a presurgical evaluation at a comprehensive epilepsy treatment program by a multidisciplinary team of specialists (neurologists, neurosurgeons, neuropsychologists, and nurse clinicians).

What happens before surgery?

During the office visit, the neurosurgeon will explain the procedure, its risks and benefits, and answer any questions. You will sign consent forms and complete paperwork to inform the surgeon about your medical history (i.e., allergies, medicines, vitamins, bleeding history, anesthesia reactions, previous surgeries). Discuss all medications (prescription, over-the-counter, and herbal supplements) you are taking with your health care provider. Some medications need to be continued or stopped the day of surgery. Presurgical tests (e.g., blood test, electrocardiogram, chest X-ray) may need to be done several days before surgery. Consult your primary care physician about stopping certain medications and ensure you are cleared for surgery.

You may be asked to wash your skin and hair with Hibiclens (CHG) or Dial soap before surgery. It kills bacteria and reduces surgical site infections. (Avoid getting CHG in eyes, ears, nose or genital areas.)

Don’t eat or drink after midnight before surgery (unless the hospital tells you otherwise).

Arrive at the hospital 2 hours before your scheduled surgery time to complete the necessary paperwork and pre-procedure work-ups. You will meet with a nurse who will ask your name, date of birth, and what procedure you’re having. They will explain the pre-operative process and discuss any questions you may have. An anesthesiologist will talk with you and explain the effects of anesthesia and its risks.

What happens during surgery?

There are five main steps to the anterior temporal lobectomy. The surgery generally takes 3 to 4 hours.

Step 1: prepare the patient
You will lie on your back on the operative table and be given anesthesia. Once asleep, your head is placed in a skull fixation device attached to the table that holds your head in position during the surgery. Depending on where the incision will be made, your hair may be shaved.

Step 2: perform a craniotomy
After your scalp is prepped, the surgeon will make a skin incision to expose the skull. A circular opening in the skull, called a craniotomy, is drilled (see Craniotomy) (Fig 3). This bony opening exposes the protective covering of the brain, called the dura mater, which is opened with scissors. 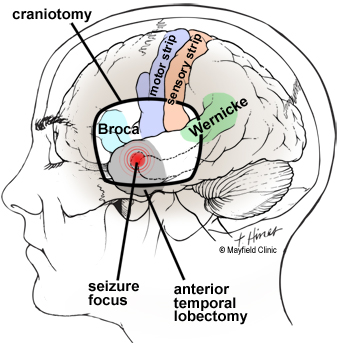 Step 3: perform brain mapping
Depending on your specific case, intraoperative EEG recording and stimulation with subdural electrodes may be performed to map brain areas (Fig. 4), or reconfirm the epileptic zone, particularly how much of the lateral temporal cortex is involved. Using a small electrical probe, the surgeon tests locations on the brain’s surface one after another to create a map of functions. During mapping, areas involved with movement can be identified electrically even if the patient is under anesthesia. However, to map areas such as language, sensation, or vision, the patient is awakened to be able to communicate with the surgeon. Local anesthesia and numbing agents are given so you won’t feel any pain. 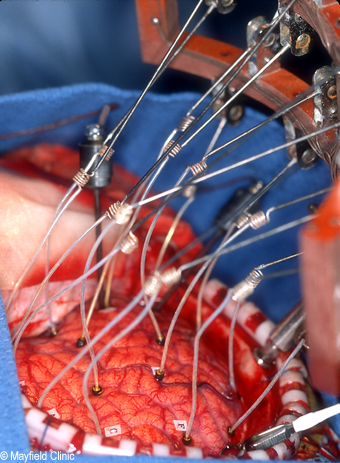 Step 5: close the craniotomy
The retractors are removed and the dura is closed with sutures. The bone flap is replaced and secured to the skull with titanium plates and screws. The muscles and skin are sutured back together.

What happens after surgery?

After surgery you'll be taken to the recovery room, where vital signs are monitored as you awake from anesthesia. You'll be transferred to the neuroscience intensive care unit (NSICU) for overnight observation and monitoring. Pain medication will be given as needed. If you experience nausea and headache after surgery, medication can be given to control these symptoms. Once your condition is stable, you will be moved to a regular room where you will stay for about 1 to 3 days.

If you had a VNS implanted, you may go home after recovery from anesthesia. It is important to work with your neurologist to adjust your medications and refine the programming of the neurostimulator.

Follow the surgeon’s home care instructions for 2 weeks after surgery or until your follow-up appointment. In general, you can expect:

When to Call Your Doctor

Patients usually can resume their normal activities after 3 to 4 weeks. However, you cannot drive an automobile until you have approval from your neurologist. Doctors usually recommend that surgical patients stay on AEDs for up to two years after the operation. Some people may have to continue with medication indefinitely for seizure control. If language or memory problems continue past the recovery period, your doctor may recommend speech or physical therapy.

No surgery is without risks. General complications of any surgery include bleeding, infection, blood clots, and reactions to anesthesia. Specific complications related to a craniotomy may include:

Specific complications may include:

disconnection syndrome: the interruption of information transferred from one brain region to another.

hippocampal atrophy: a wasting or decrease in size of the hippocampus.

ictal: that which happens during a seizure.

interictal: that which happens between seizures.

localization: finding the location in the brain where epileptic seizures start.

lobectomy: surgical removal of a lobe of the brain.

seizure focus: a specific area of the brain where seizures begin.

palliative: to alleviate without curing.

partial seizure: a seizure involving only a portion of the brain.

video EEG monitoring: simultaneous monitoring of a patient’s behavior with a video camera and the patient’s brain activity by EEG

Mayfield Certified Health Info materials are written and developed by the Mayfield Clinic. This information is not intended to replace the medical advice of your health care provider.

We collaborate with other epilepsy specialists throughout the region to make sure our patients get the best care possible.

If your neurologist has recommended surgery and you would like to make an appointment, please call 513-221-1100.

For a complete list of support groups in the tri-state region, contact the Epilepsy Alliance Ohio at 513.721.2905 or Epilepsy-ohio.org

Click here for information about clinical trials conducted by our doctors at local Cincinnati hospitals.