Carotid stenosis is a narrowing of the carotid arteries, the two major arteries that carry oxygen-rich blood from the heart to the brain. Also called carotid artery disease, carotid stenosis is caused by a buildup of plaque (atherosclerosis) inside the artery wall that reduces blood flow to the brain. Treatment aims to reduce the risk of stroke by controlling or removing plaque buildup and preventing blood clots. 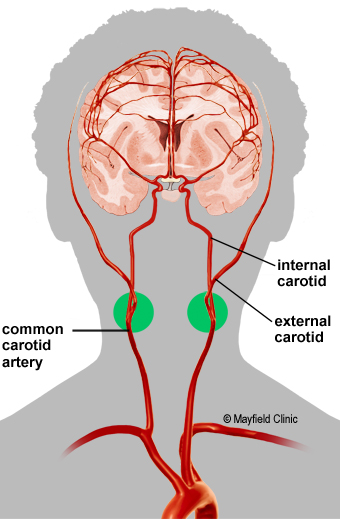 What is carotid stenosis?

Carotid stenosis is a progressive narrowing of the carotid arteries in a process called atherosclerosis. Normal healthy arteries are flexible and have smooth inner walls. As we age, hypertension and small injuries to the blood vessel wall can allow plaque to build up. Plaque is a sticky substance made of fat, cholesterol, calcium, and other fibrous material. Over time, plaque deposits inside the inner wall of the artery can form a large mass that narrows the lumen, the inside diameter of the artery. Atherosclerosis also causes arteries to become rigid, a process often referred to as "hardening of the arteries." 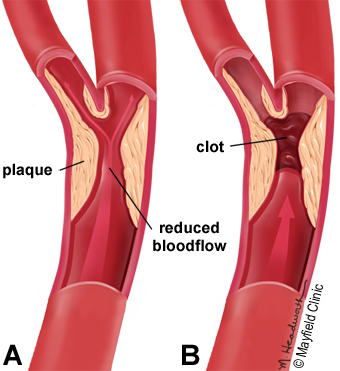 There are three ways in which carotid stenosis increases the risk of stroke:

Most people with carotid stenosis have no symptoms until the artery becomes severely narrowed or a clot forms. Symptoms are most likely to first appear with a mini-stroke, also known as a transient ischemic attack (TIA). TIAs result when blood flow to the brain is temporarily interrupted and then restored. The symptoms typically last a couple of minutes and then resolve completely, and the person returns to normal. TIAs should not be ignored; they are a warning that an ischemic stroke and permanent brain injury may be looming. Symptoms of a TIA or an ischemic stroke can include weakness or numbness in an arm or leg, difficulty speaking, a drooping face, vision problems, or paralysis affecting one side of the body. If you or a loved one develops these symptoms, you should call 911 immediately.

Atherosclerosis is the major cause of carotid artery disease. It can begin in early adulthood, but it usually takes decades to cause symptoms. Some people have rapidly progressing atherosclerosis during their thirties, others during their fifties or sixties. Atherosclerosis begins with damage to the inner wall of the artery caused by high blood pressure, diabetes, smoking, and high cholesterol –specifically "bad" cholesterol or low-density lipoprotein (LDL). Other risk factors include obesity, coronary artery disease, a family history of carotid stenosis, and advanced age.

People who have heart disease have an increased risk of developing carotid stenosis. Typically, the carotid arteries become diseased a few years later than the coronary arteries.

Older people are more likely to be affected by carotid stenosis. Before age 75, men are more at risk than women. A person who has high cholesterol, has high blood pressure, and smokes is eight times more likely to develop atherosclerosis than a person without these risk factors. More than 500,000 new strokes occur in the United States each year, and carotid stenosis is estimated to cause 20 to 30% of them.

Your doctor will learn as much as possible about your symptoms, current and previous medical problems, current medications, and family history. He or she will perform a physical exam. The doctor may listen to the carotid artery with a stethoscope to detect a swishing noise called a "bruit." A bruit may be a sign of turbulent blood flow caused by atherosclerosis. One or more diagnostic tests are performed to detect narrowing of the carotid arteries. Carotid stenosis is diagnosed by either a doppler ultrasound of the neck, a CT angiogram (CTA) of the neck, magnetic resonance angiography (MRA), or a cerebral angiogram.

Imaging also can reveal evidence of multiple small strokes. Doctors can make a diagnosis of carotid stenosis if tests show diminished blood flow in one or both carotid arteries. You may be referred to a neurosurgeon for a surgical consultation. 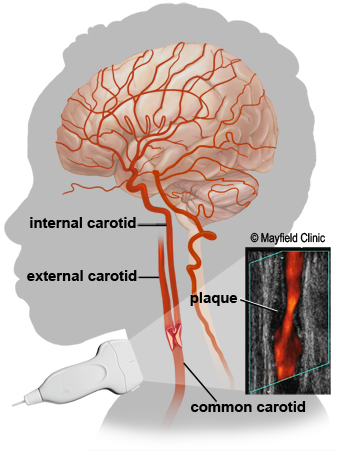 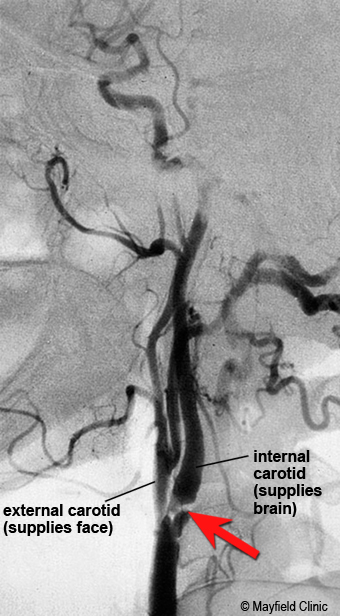 The goal of treatment is to reduce the risk of stroke. Treatment options vary according to the severity of the arterial narrowing and whether you are experiencing stroke-like symptoms or not.

Surgical treatment is generally recommended for patients who have suffered one or more TIAs or strokes and who have a moderate to high grade of carotid stenosis [2,3]. The aim of surgery is to prevent stroke by removing or reducing the plaque buildup and enlarging the artery lumen to allow more blood flow to the brain. 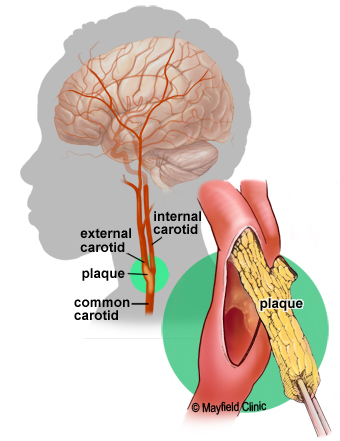 Depending on your risk factors, your physician may ask you to stop smoking, limit heavy alcohol consumption, maintain good blood-sugar control (if you have diabetes), have your cholesterol checked regularly, and take medications as prescribed.

After carotid endarterectomy, restenosis can occur in less than two years and is usually not symptomatic. These regrown plaques can be treated with angioplasty and stenting. The plaques may regress with time, and intervention is reserved for stenosis greater than 80%. After two years, restenosis is more often related to progression of atherosclerotic disease. In general, repeat surgery or stenting is advised for symptomatic restenosis or stenosis greater than 80%.

atherosclerosis: a disease of the arterial blood vessels, in which the walls of the arteries become thickened and hardened by plaques. Plaques are composed of cholesterol and other lipids, inflammatory cells, and calcium deposits; also called "hardening of the arteries."

cholesterol: a fat-like substance that is made by the human body and eaten in animal products. Cholesterol is used to form cell membranes and process hormones and vitamin D. High cholesterol levels contribute to the development of atherosclerosis.

endarterectomy: a surgical procedure in which material occluding the carotid artery is cleaned out, thereby restoring normal blood flow to the brain and preventing a stroke.

fibromuscular dysplasia: abnormal cell growth in the artery walls that causes narrowing and a "string of beads" appearance; usually affects arteries of the kidneys and brain.

lumen: the inside diameter of a blood vessel or hollow organ.