An arteriovenous malformation (AVM) is an abnormal tangle of blood vessels in the brain or spine. Some AVMs have no specific symptoms and little or no risk to one’s life or health, while others cause severe and devastating effects when they bleed. Treatment options range from conservative watching to aggressive surgery, depending on the type, symptoms, and location of the AVM.

What is an arteriovenous malformation (AVM) 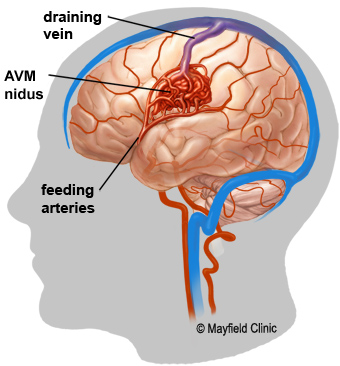 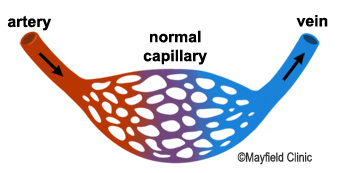 Figure 1. An AVM is a tangled bundle of blood vessels where arteries connect directly to veins with no capillary bed between. This creates a system of multiple feeding arteries, the tangle or nidus, and enlarged draining veins.

In an AVM, arteries connect directly to veins without a capillary bed in between (Fig. 1). This creates a problem called a high-pressure shunt or fistula. Veins are not able to handle the pressure of the blood coming directly from the arteries. The veins stretch and enlarge as they try to accept the extra blood. The weakened blood vessels can rupture and bleed and are also more likely to develop aneurysms. The surrounding normal tissues may be damaged as the AVM “steals” blood from those areas. There are several types of AVMs:

AVMs can form anywhere there are arteries and veins. Brain AVMs can occur on the surface (also called cortical), deep (in the thalamus, basal ganglia, or brainstem), and within the dura (the tough protective covering of the brain).

Spinal AVMs can occur on the surface (extramedullary) or within the spinal cord (intramedullary) and are classified into 4 types:

The symptoms of AVMs vary, depending on their type and location. While migraine-like headaches and seizures are general symptoms, most AVMs do not show symptoms (are asymptomatic) until a bleed occurs. Common signs of brain AVMs are:

Common signs of spinal AVMs are:

AVMs damage the brain or spinal cord in three ways:

The risk of AVM bleeding is 2 to 3% per year. Death from the first hemorrhage is between 10 to 30%. Once a hemorrhage has occurred, the AVM is 9 times more likely to bleed again during the first year.

Patients often want to know their lifetime risk of bleeding if they are weighing the risks and benefits of having surgery. Using the following formula one can calculate one’s risk [1]:

For example, a 25-year-old man has an 80% lifetime risk of bleeding (at least once). Many factors affect this percentage, including where the AVM is located and what type of AVM it is. It's best to talk to your doctor about your own individual risk.

The cause of AVMs is unknown, but researchers believe most occur during fetal development. AVMs of the brain and spine are present at birth, but are usually not hereditary.

AVMs are relatively rare, more common in men, and most often cause symptoms between 10 and 40 years of age. AVMs account for about 2% of all hemorrhagic strokes each year.

Whether you or a loved one was brought to the emergency room with a ruptured AVM or are considering treatment options for an unruptured AVM, your doctor will learn as much as possible about your symptoms, current and previous medical problems, current medications, and family history. He or she also will perform a physical exam. Diagnostic tests are used to help determine the AVM’s location, size, type, and involvement with other structures. 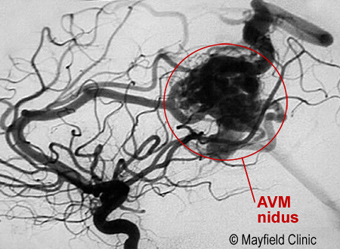 Figure 2. Angiogram depicts a large AVM in the parietal lobe of the brain. Feeding arteries lead to a tangled nidus that shunt blood directly into a large draining vein.

Surgery, endovascular therapy, and stereotactic radiosurgery can be used alone or in combination to treat an AVM. Endovascular embolization is often performed before surgery to reduce the AVM size and risk of operative bleeding. Radiosurgery or embolization may be used after surgery to treat any remaining portions of the AVM. Your neurosurgeon will discuss with you all the options and recommend a treatment that is best for your individual case.

If there have been no previous hemorrhages, the doctor may decide to observe the patient, which may include using anticonvulsants to prevent seizures and medication to lower blood pressure.

Radiosurgery aims precisely focused beams of radiation at the abnormal vessels. The two main technologies are the Leksell Gamma Knife and linear accelerator systems, such as the BrainLab Novalis. The procedure takes several hours of preparation and one hour to deliver the radiation. The patient goes home the same day. After 6 months to 2 years, the vessels gradually close off and are replaced by scar tissue. The advantage of this treatment is no incision and the procedure is painless. The disadvantages are that it works best with smaller AVMs and may take a long time to show effect (during which time the risk of hemorrhage exists).

In a recent long-term study, 90% of patients had obliteration of their AVM 5 years after stereotactic radiosurgery, and 4% of patients experienced repeat hemorrhage during the waiting period [2].

Embolization is a minimally invasive procedure that uses small catheters inserted into your blood vessels to deliver glue or other obstructive materials into the AVM so that blood no longer flows through the malformation (Fig. 3). It is performed in the angiography suites of the radiology department. A small incision is made in the groin and a catheter is inserted into an artery then passed through the blood vessels to the feeding arteries of the AVM. Occluding material, either coil or acrylic glue, is passed through the catheter into the AVM. The procedure time can vary, and the patient remains in the hospital several days for observation. The advantage of this treatment is that it is less invasive than surgery and can be used to treat deep or inoperable AVMs. Disadvantages include the risk of embolic stroke from the catheter and rebleeding because the AVM is not completely obliterated. Multiple treatments may be necessary. 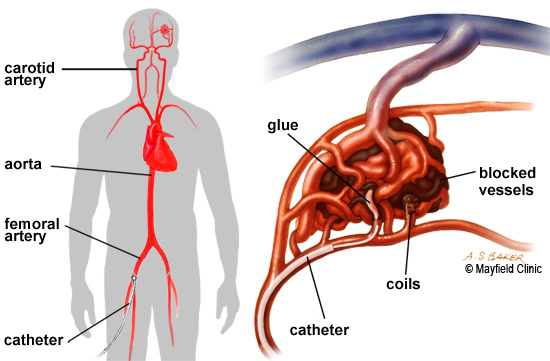 Using general anesthesia, a surgical opening is made in the skull, called a craniotomy. The brain is gently retracted so that the AVM may be located. Using a variety of techniques, such as laser and electrocautery, the AVM is shrunken and dissected from normal brain tissue. The length of stay in the hospital varies between 5 to 7 days, with some short-term rehabilitation. The type of craniotomy performed depends on the size and location of the AVM. The option of surgery also depends on the general health of the patient. The advantage of surgical treatment is that a cure is immediate if all the AVM is removed. Disadvantages include the risk of bleeding, damage to nearby brain tissue, and stroke to other areas of the brain once the AVM is removed.

The Aneurysm and AVM Foundation

arteriovenous fistula: an abnormal passage or opening between an artery and a vein.

dura mater: a tough, fibrous, protective covering of the brain and spinal cord.

embolization: blockage of a blood vessel so blood can no longer flow through it.

endovascular: occurring within the blood vessels.

hemorrhage: bleeding in the brain, which may cause a stroke.

nidus: the central part of an AVM.

occlusion: the process of closing.

subarachnoid hemorrhage: bleeding in the space surrounding the brain; may cause a stroke.

Mayfield Brain & Spine treats about 70 people with arteriovenous malformations (AVM), cavernomas, and AV fistulas of the brain each year.

We work collaboratively with neurologists, neuroradiologists, neurointensivists, and radiation oncologists to bring you the very best care available.

Endovascular describes the minimally invasive technique of accessing the AVM from within the bloodstream, specifically during angiography, to treat the vessels with coils or glues.
Learn more >