An aneurysm is a balloon-like bulge of an artery wall. As an aneurysm grows it puts pressure on nearby structures and may eventually rupture. A ruptured aneurysm releases blood into the subarachnoid space around the brain. A subarachnoid hemorrhage (SAH) is a life-threatening type of stroke. Treatment focuses on stopping the bleeding and repairing the aneurysm with clipping, coiling, or bypass.

What is a ruptured aneurysm?

An aneurysm is a balloon-like bulge or weakening of an artery wall. (Similar to a balloon on the side of a garden hose.) As the bulge grows it becomes thinner and weaker. It can become so thin that the blood pressure within can cause it to leak or burst open. Aneurysms usually occur on larger blood vessels at the fork where an artery branches off. Types of aneurysms include (Fig. 1): 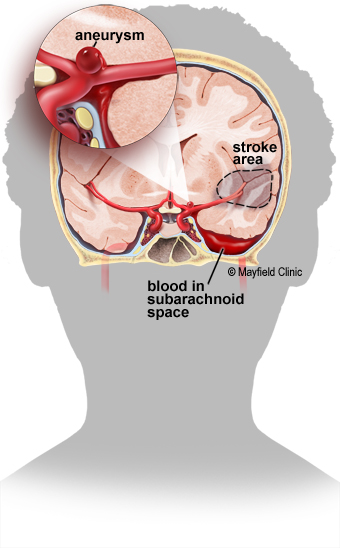 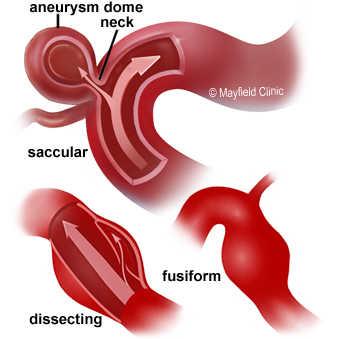 Figure 1. A ruptured aneurysm releases blood into the subarachnoid space around the brain causing a stroke (left). Different types of aneurysms (right).


When an aneurysm bursts, it releases blood into the spaces between the brain and the skull. This space is filled with cerebrospinal fluid (CSF) that bathes and cushions the brain. As blood spreads and clots it irritates the lining of the brain and damages brain cells. At the same time, the area of brain that previously received oxygen-rich blood from the affected artery is now deprived of blood, resulting in a stroke. A subarachnoid hemorrhage (SAH) is life threatening with a 40% risk of death.

Enclosed within the rigid skull, clotted blood and fluid buildup increases pressure that can crush the brain against the bone or cause it to shift and herniate. Blockage of the normal CSF circulation can enlarge the ventricles (hydrocephalus) causing confusion, lethargy, and loss of consciousness.

A complication that occurs 5 to 10 days after aneurysm rupture is vasospasm (Fig. 2). Irritating blood byproducts cause the walls of an artery to spasm and narrow, reducing blood flow to that region of the brain and causing a secondary stroke. 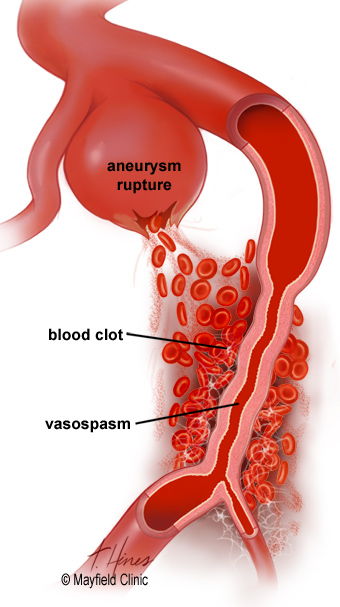 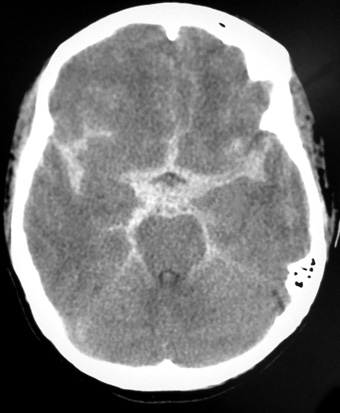 Figure 2. (left) When red blood cells break down, toxins can cause the walls of nearby arteries to spasm and narrow. The larger the SAH, the higher the risk of vasospasm. Figure 3. (right) CT scan shows blood (white star-shape) in the subarachnoid space from a ruptured aneurysm.


What are the symptoms?

Most aneurysms don't have symptoms until they rupture. Rupture usually occurs while a person is active rather than asleep. If you experience the symptoms of a SAH, call 911 immediately!

When a person is brought to the emergency room with a suspected ruptured aneurysm, doctors will learn as much as possible about his or her symptoms, current and previous medical problems, medications, and family history. The person's condition is assessed quickly. Diagnostic tests will help determine the source of the bleeding.

Your loved one may be unable to make decisions about treatment. So you may need to decide what’s best for him or her. The doctors may refer to the Hunt-Hess SAH scale as an indicator of the patient’s condition.

Treatment may include lifesaving measures, symptom relief, repair of the bleeding aneurysm, and complication prevention. For 10 to 14 days following an aneurysm rupture, the patient will remain in the neuroscience intensive care unit (NSICU), where doctors and nurses can watch closely for signs of renewed bleeding, vasospasm, hydrocephalus, and other potential complications.

Pain medication will be given to alleviate headache and anticonvulsant medication may be prescribed to prevent or treat seizures.

Determining the best treatment for a ruptured aneurysm involves many factors, such as the size and location of the aneurysm as well as how stable is the patient’s current condition.

Clotted blood and fluid buildup in the subarachnoid space may cause hydrocephalus and elevated intracranial pressure. Blood pressure is lowered to reduce further bleeding and to control intracranial pressure. Excess cerebrospinal fluid (CSF) and blood may be removed with: 1) a lumbar drain catheter inserted into the subarachnoid space of the spinal canal in the low back, or 2) a ventricular drain catheter, which is inserted into the ventricles of the brain through a small hole in the skull.

Five to 10 days after a SAH, the patient may develop vasospasm. Vasospasm narrows the artery and reduces blood flow to the region of the brain that the artery feeds. Vasospasm occurs in 70% of patients after SAH. Of these, 30% have symptoms that require treatment.

A patient in the NSICU will be closely monitored for signs of vasospasm, which include weakness in an arm or leg, confusion, sleepiness, or restlessness. Transcranial doppler (TCD) ultrasounds are performed routinely to monitor for vasospasm (see SAH). TCDs are used to measure the blood flow through the arteries. This test can show which arteries are in spasm as well as the severity. To prevent vasospasm, patients are given the drug nimodipine while in the hospital. Additionally, the patient’s blood pressure and blood volume will be increased to force blood through the narrowed arteries.

If vasospasm is severe, patients may require an injection of medication directly into the artery to relax and stop the spasm. This is done through a catheter during an angiogram. Sometimes balloon angioplasty is used to stretch open the artery.

The possibility of having a second bleed is 22% within the first 14 days after the first bleed. This is why neurosurgeons prefer to treat the aneurysm as soon as it is diagnosed, so that the risk of a rebleed is lessened.

Aneurysm patients may suffer short-term and/or long-term deficits as a result of a rupture or treatment. Some of these deficits may disappear over time with healing and therapy. After a patient is discharged from the hospital, treatment may be continued at a facility that offers personalized rehabilitation therapies following a serious brain injury. A doctor who specializes in rehabilitation will oversee this care, which can include physical, occupational, and speech therapy. The recovery process is long and may take months or years to understand the deficits you incurred and regain function.

vasospasm: abnormal narrowing or tightening of arteries due to irritation by blood in the subarachnoid space.

Endovascular describes the minimally invasive technique of accessing the aneurysm from within the bloodstream, specifically during angiography, to treat the aneurysm with coils, stents, or glues. Learn more >

Dr. Andrew Ringer, a neurovascular specialist, gives us 7 steps you can take to reduce your risk of stroke. He concludes by telling us how we can recognize the signs of stroke F-A-S-T.