John M. Tew, Jr., MD, a Mayfield Clinic neurosurgeon and Professor of Neurosurgery at the University of Cincinnati College of Medicine, is a leader of the Chiari Center. Dr. Tew is a nationally recognized expert in the treatment of Chiari malformation, a condition in which a portion of the brain pushes through the opening at the base of the skull, causing an array of symptoms that range from mild to severe. Symptoms can include headaches, fatigue, difficulty swallowing, muscle weakness and balance problems.

"The Mayfield Clinic is proud to announce the formation of a new Chiari Center," said Ronald E. Warnick, MD, Chairman of the Mayfield Clinic. "Patients with Chiari come to Mayfield from all over the United States, and every year our team of experts evaluates and treats more patients with Chiari than the year before. We are now dedicating additional resources and talent in a focused, concerted effort so that more patients can benefit from this multidisciplinary approach to a complex disease."

The Chiari Center’s Community Advisory Board is headed by Ray D’Alonzo, a former Chiari patient and the author of Contents Under Pressure: One Man’s Triumph Over Chiari Syndrome. Mr. D’Alonzo is a retired Procter & Gamble executive.

Chiari (pronounced kee-AR-ee) malformation is named after Hans Chiari, an Austrian pathologist who first described it in the late 19th century. It affects one in every 1,000 to 1,200 individuals and is classified as Chiari I, II, III or IV. Chiari I, the least severe form, is also the most common.

Symptoms can appear at birth or late in life. The first symptom, which is often headache, emerges once the blockage is sufficiently severe. A Chiari I malformation often goes undiagnosed until adulthood, because symptoms are delayed. Confusing or ambiguous symptoms are frequently misinterpreted.

“Some of our most satisfying work involves treating people with Chiari malformation,” Dr. Tew said. “Patients come to us in search of someone who will listen. Often they have sought help from one doctor after another, trying to find someone who will understand their problem and help them find a solution. “Some have been told they have migraines or fibromyalgia,” Dr. Tew continued. “Some have been told their discomfort is ‘all in their head.’ It is a true privilege to be able to help these patients, who have sought relief from their pain for so long.”

Each year the Mayfield Clinic evaluates more than 90 people affected by Chiari malformation. Some patients require monitoring only, but most need decompression surgery to enlarge the bony opening, to restore normal fluid circulation around the brain, and to prevent a syrinx, a cyst that results from the accumulation of cerebrospinal fluid in the spinal canal. (This condition, called syringomyelia, can damage the spinal cord, thereby causing its own cascade of neurological problems.)

Mayfield works closely with Cincinnati Children’s Hospital Medical Center, one of the most highly regarded pediatric hospitals in the world. Adult and adolescent Chiari I cases are treated by Mayfield neurosurgeons; infants and children younger than 13 are referred to Cincinnati Children’s. 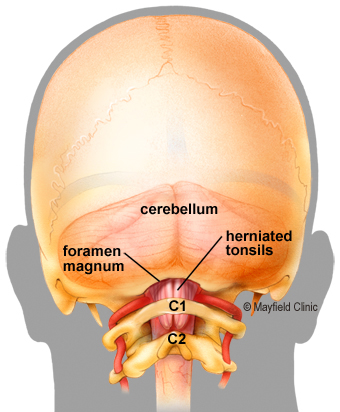